During the first week in May, our work at Fortín de Piedra broke a historic record, injecting 20 million cubic meters of gas into the network in just one day. Martín Bengochea, regional director of the Neuquen Basin and Vaca Muerta, tells the story behind another record-breaking achievement. 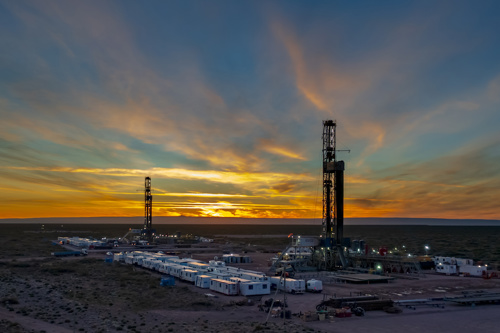 Like every afternoon, the control panel report arrived complete with the usual information: the partial production columns, the initials indicating each pad, projections and a range of the pressures monitored. But this time, the total sum came to an unprecedented figure: 20,011,093 m3.

The key for the Tecpetrol team, as always, is to work with the commitment towards the company’s objectives, an integral part of its pledge to both past and present, so that the efforts made jointly by all the company's sectors, come together in the Production area, have a successful outcome visible in the end result. “This was a major challenge since several tasks had to be carried out in parallel and completed by specific deadlines in order to get the production of new wells online. Much of the work was carried out at installations making up part of our plans to meet sales objectives set in previous months, which involved significant coordination," analyzes Bengochea, who is enthusiastic not only about the company’s latest production records but also, and more importantly, about the conditions that made this possible.

As Bengochea explains it, “The volumes certainly make us happy and are a source of pride, but in fact, they’re not that surprising as they are a logical result of all the efforts made, and the steps taken to get there are clear for all to see. The most important achievements were a recoupling task which enabled us to send production directly to the Early Processing Facility (EPF), the first Tecpetrol plant, which is also the predecessor and complement to the main plant in the area, known as the CPF, or Central Processing Facility. The other key point was the works at the gas pipeline measurement point in Vaca Muerta Sur. Then we also had to install a series of new pads to go into production. We added more branches and spheres to bring up the flow rates at those wells, based on what we’d learned over the previous winter. We had wells whose output exceeded a million cubic meters!”

More than twenty million cubic meters were injected into the network in a single day, not only making history but raising the bar for the future, opening the door to a new stage on the path of growth aimed at responding to the country’s energy needs, in constant expansion. “This is by no means the first record we’ve broken at Fortin, and there will be many more to come, but each new milestone fills us with pride and galvanizes us to tackle new challenges.”

A strong team with all the enthusiasm necessary to tackle any task, but also, the right procedures, calculated and well-planned steps, and an emphasis on ensuring the safety of all company operators and contractors. "This is a major achievement, particularly given the fact that we have attained this goal with excellent results in our Health, Safety and Environment indicators."

Although winter is coming, and the next few months promise to be long ones, the company's leader in the Neuquen basin is confident that they will come through these with flying colors. The team is fully complying with all processes and the company continues to improve its safety management on a daily basis. “We’re expecting to work very hard over the next few months so that we can consistently guarantee this level and standard of delivery. We know it will be a permanent challenge that will require major efforts, but at the same time, we are already evaluating increasing our capacity for the winter period in years to come, and planning the drilling of new pads, among other goals, which will take us to new output levels."