Agua Salada: setting all-time highs thanks to a successful campaign

After thirty years of development in the block, which has been a key asset for Tecpetrol, particularly at the outset of its activities, the Agua Salada field has recently hit new oil production targets, among other milestones. The story behind these remarkable results. 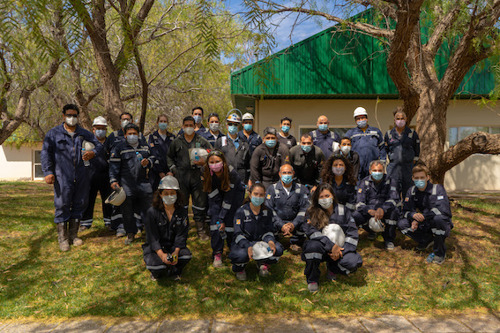 Tecpetrol has been operating the Agua Salada field since 1990, a development with a long, rich history as one of the major pillars of the company’s activity, particularly in its early days. Today, the field’s story is crowned by its latest achievement: during the second half of 2021, it set a new record with daily oil production levels hitting a high of 518 m3/d in September. This came in the wake of another milestone in July when the historical accumulated monthly production record nudged 88,000 barrels.

"As Agua Salada is a mature field, we are delighted to see new opportunities appearing from exploration," said Julio Vieytes, who heads up projects in Tecpetrol’s Conventional Neuquen Basin. Key to achieving this milestone was the start-up of super-productive wells PdlCh.x-1 and ADIS.e-21, during 2019, oil and gas producing wells, respectively, which have set new records. "We’ve been focusing efforts on achieving seamless collaboration between the engineering and production sectors in the ADIS.e-21 well, which stands head and shoulders above the rest in terms of output, and has placed a high demand on all the well and plant installations," he added.

After two years of effective production, the PdlCh.x-1 oil well lying in the southeast of the field has an accumulated output of 600,000 barrels of oil. Everything points to the likelihood of its being the most productive well in the area in the very near future, thanks to its unique geological features. With the capacity to individually drain a large structure, it will maximize profitability by producing significant savings in drilling. If all the right conditions are met, its performance will outstrip well LJ-1008, which accumulated 735,000 barrels but is currently on hold.

The block is situated at Km. 76 on Route 151 in the western area of Rio Negro, and is the second gas-producing field in the province (contributing 18% of the total), as well as producing oil. So far 111 wells have been drilled, twenty-one of these since the concession was extended in 2014. The ADIS.e-21 gas well, for its part, has accumulated 225 million m3 of gas and 290,000 barrels of associated oil, remaining stable at a rate of 250 Mm3 per day of gas production and 20 m3/d of oil.

A region backed by thirty years of development2021 was a highly productive year for Agua Salada.

The latest record-breaking production levels owe their success as much to a solid production base as to a highly effective campaign to develop new wells and carry out workovers. PdlCh.a-2 and LA.a-8 were drilled with very good results while workovers were carried out on wells CHr.x-1, LAN.x-1, LA.a-6 and LC.a- 2(d). The program adheres to the company’s post-pandemic production recovery policy, following the upwards curve that began in 2015 with the renegotiation of the concession.

"We are delighted to see that the field can still achieve these oil flows after so many years of development, while gas levels remain close to 1 MMm3/d,” concluded Vieytes, adding that “this shows that there is always room for new opportunities."